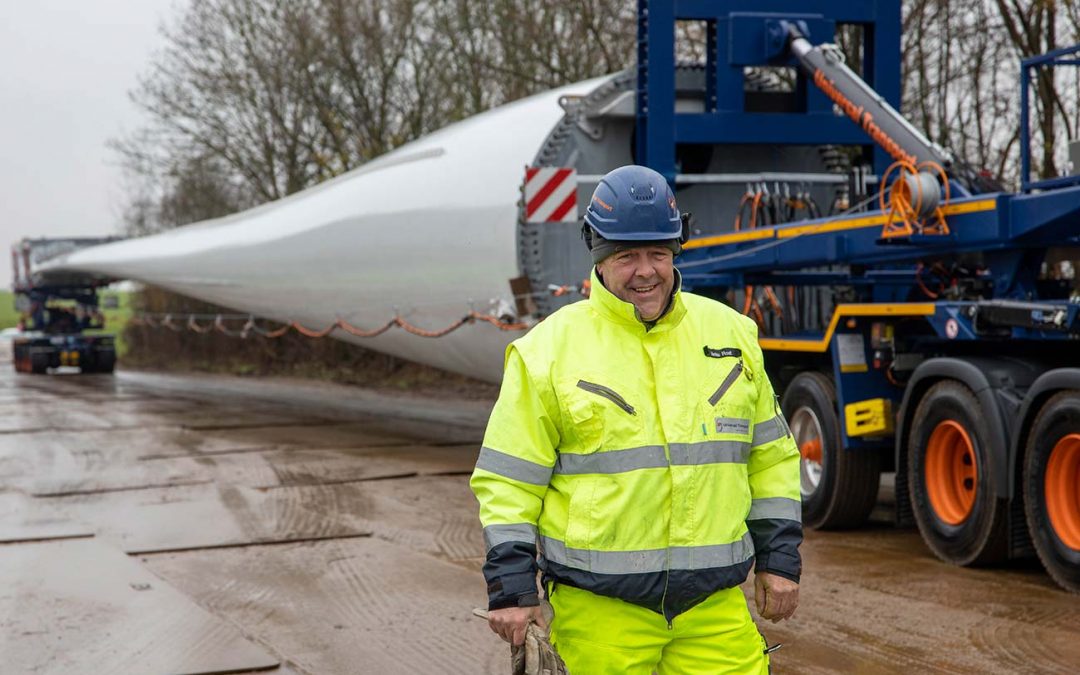 The forwarding company Universal Transport specialises in transporting heavy loads such as aircraft or wind turbine rotor blades. For more than 60 years, Universal Transport has been planning such elaborate projects with a lot of perseverance, concentration, patience as well as good material – and always under the charming company motto “… don’t worry, be heavy!”.

“We’ve never had a gramme stand still,” says Holger Dechant, Managing Director of the Universal Transport Group. “Everything we can get tied down on our vehicles, we transport.” And these are usually not just a few grammes for the Paderborn-based haulage company: it tends to move weights of several tonnes – whether aircraft, transformers, prefabricated concrete parts, combine harvesters, rotor blades of wind power plants or entire trams. The company specialises in heavy transports in the construction industry, wind power, rail, industry and large vehicles. Universal Transport has adopted the relaxed motto “… don’t worry, be heavy!”, based on the song of almost the same name by Bobby McFerrin. If you already have the well-known melody in your ears: Go ahead, hum or whistle away – the song puts you in a good mood! Dechant uses it as a ringtone on his smartphone. And he listens to it quite often.

No shyness about investments

The customers who contact him face a variety of challenges for which the Universal Transport team develops custom-fit solutions. According to Holger Dechant, the fact that no gramme has ever come to a standstill is also due to creativity: “We like to go to our fleet manager Frank Rakowski with quite crazy ideas and present him with what a customer needs. This often causes him a worry line or two at first. But a day or two later he’s sure to have found a way to implement the project.” Sales Representative Dennis Gisella explains: “If something doesn’t fit in terms of dimensions, we don’t shy away from investments. Recently, for example, we bought 160 tonnes of rail bridge for 250,000 euros.”

Among other things, 22 trams are to be transported from Kassel to Mexico. The international heavy transport there is made possible because Universal Transport entered the global network of large-volume and heavy transports with the takeover of the forwarding company Züst & Bachmeier in 2016. “In the past, our journey as Universal Transport would have ended in Bremerhaven with this order. Today, we can offer complete handling through Züst & Bachmeier. Like a project forwarder, the company takes care of all the documentation and organises the onward journey in Mexico,” says Dennis Gisella. Hardly any transport company in Europe has as many special vehicles for rail transport in its fleet as Universal Transport. 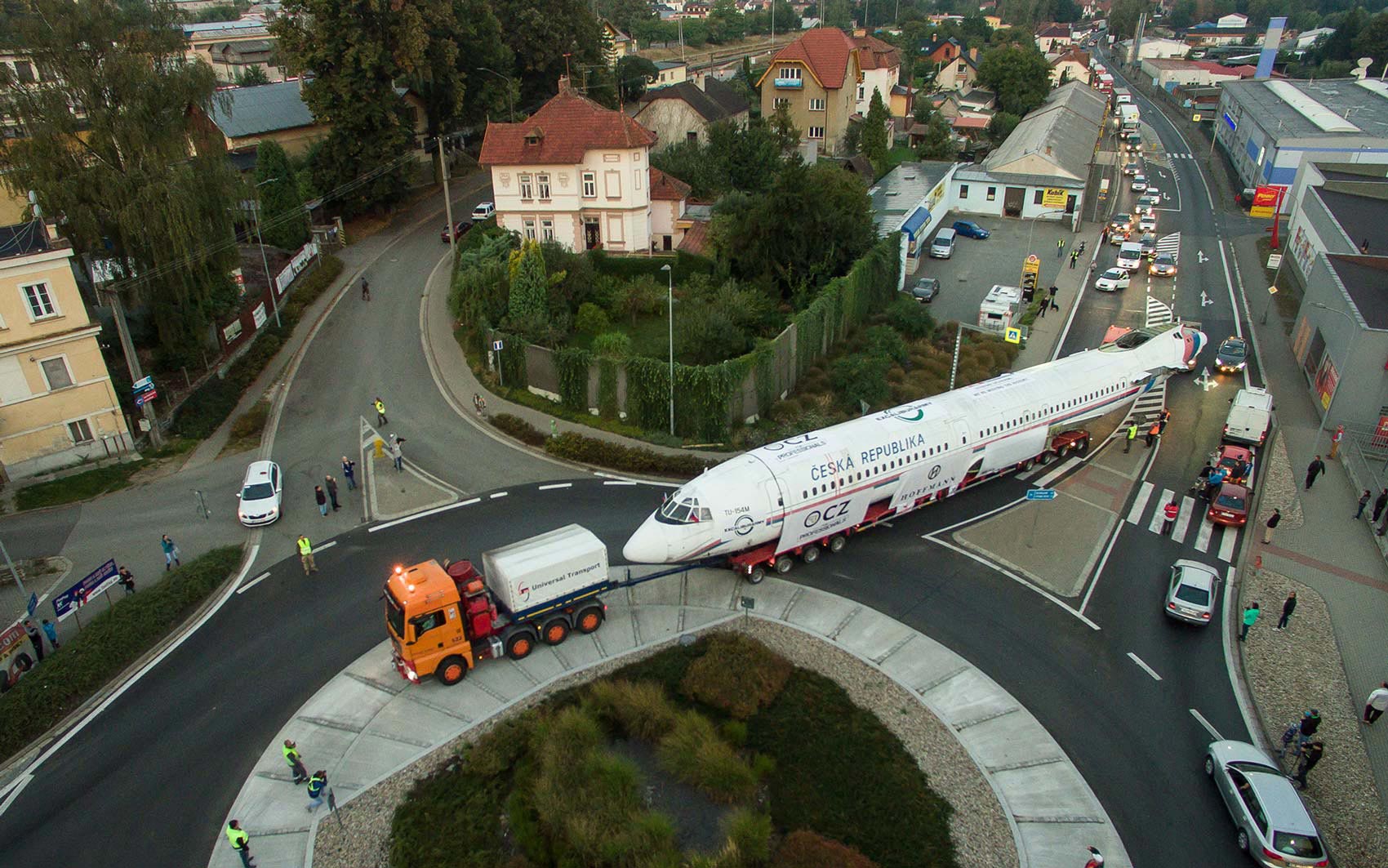 »We need the people who can properly handle the technology and who have good ideas for implementing transport.«

Throughout Germany, the company is the only project forwarder with 350 vehicles. “At the same time, there is no other trucker with 30 heads in project management,” says Fleet Manager Frank Rakowski, describing the company’s USP. For him, it is clear that heavy haulage is a team affair. “We need the people who can properly handle the technology and who have good ideas for implementing transports.” Because good planning in advance determines success: “We have to think through very carefully how we can implement something, how we can master a certain technique and what we can tease out with it to perhaps achieve one or the other advantage.”

Optimal use for drum brakes

“The vehicles we use have to be absolutely reliable,” says Rakowski. Around 2,000 axles from the chassis specialist BPW Bergische Achsen KG are installed in the fleet alone. “We love driving with drum brakes because they are technically optimal for our conditions. We have found that we only have to replace them once over the life cycle of a trailer. In addition, they are very reliable and meet all our high requirements.” The axle is particularly important in a heavy transport because it has to withstand the heaviest load, explains Rakowski. BPW’s Customised Solutions business unit ensures that even the most specialised customer projects can be reliably implemented. “BPW’s quality convinces us, among other things, because we hardly ever have any damage. And if it does happen, it’s because we’ve touched down somewhere or driven over it. But we can rule out the possibility of having problems with the axle on the way.

A breakdown would mean several days off

The heavy load specialists have a big disadvantage compared to tarpaulin hauliers: “If our machine breaks down during transport, we can’t say we’ll just change saddles and the next vehicle will be there in an hour. Because of the permit, everything is fixed: The registration number of the vehicle and the trailer are one unit that has to travel from A to B and cannot and must not be separated. So if there is a breakdown, we have to get new permits and are at a standstill for days.” There is also another very important reason why the material used in a heavy transport should be of optimal quality, according to Holger Dechant: “The transports don’t run by themselves. There are always people involved: in addition to the driver who drives the front, the attendant and the rear steer. And when we load, for example in the port, there are also people running around the vehicles and the transported goods. They all have to be protected.” 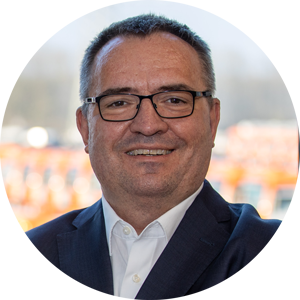 »If there is no more tension among the people involved in a transport, it can quickly become dangerous. I always say: If we are transporting 25 wind turbines, the first and the last are the most challenging.«

Imagine what happens if 110, 120 or 130 tonne parts are secured on the vehicle negligently or with poor quality and then something starts to move: “We have a huge responsibility. Routine is the biggest enemy in this business,” adds Dechant: “If there is no longer any tension among the people involved in a transport, it can quickly become dangerous. I always say: When we transport 25 wind turbines, the first and the last are the most challenging. That’s when we need full concentration, a bit of thrill and adrenaline.” This is also due to the fact that every transport is different, he says. “The load of the vehicle alone is not always the same, the weight is distributed differently, and the driver has to adapt accordingly. Often he doesn’t know how the vehicle will behave until he starts driving.” All the more reason for everyone to be concentrated. “The greatest damage that occurs is not during transport, but in our yard – when parking after work,” says Dennis Gisella.

Universal Transport has been active in the market for more than 60 years. Originally, the company brought sand, chippings and cement to the concrete plants in the region. “So the idea was obvious to also transport precast concrete slabs,” reports Dechant. “So we started doing that and took our first steps into heavy haulage in the 1970s.” In 2021, concrete is still called “the grey gold” within the company. “Many people smile at us as concrete hauliers because we have a correspondingly large fleet of vehicles – but we can live well with that,” says Dechant. “A 3.50-metre-wide slab is already a large-volume and heavy transport – and if, for example, a logistics hall is being built, you need a lot of precast concrete parts, so you also need a correspondingly large number of vehicles.”

According to the managing director, the administrative regulations in Germany are a major obstacle: “The regulations are strict and the costs for them are rising. This makes transport more expensive for our customers – without us as a forwarder having more revenue.” At the same time, he says, one often has to accept longer distances in heavy transport. “It is not uncommon for us to drive around 900 kilometres instead of 300 kilometres directly.” And transport is a state matter: “So we need our own permits for each federal state in which we are on the road. That simply takes too long, other countries in Europe can do it better.” The road infrastructure is also a big challenge, the managing director explains. “It’s not even necessarily the weight of a transport that is the problem. It’s more the dimensions: the rotor blade of a wind turbine is more than 80 metres long, with the vehicle we’re talking about the length of a football field. With locks, there are already the first limits at 90 metres.”

Over the past decades, the company has repeatedly proven that it moves with the times. Universal Transport is opening up new markets and is already active in Poland, the Czech Republic, Russia, Turkey, Sweden and Egypt, among other countries. Dechant and his team are open to alternative means of transport and are always looking at new solutions. Digitalisation continues to be a focus. “We are constantly looking for solutions that will enable us to improve even further, and that really extends to professional drivers,” says Holger Dechant. “But one thing always applies: digitalisation will never replace transport. And the focus is always on people. We can have the best location in the world – without the right people, we have no chance of success.” 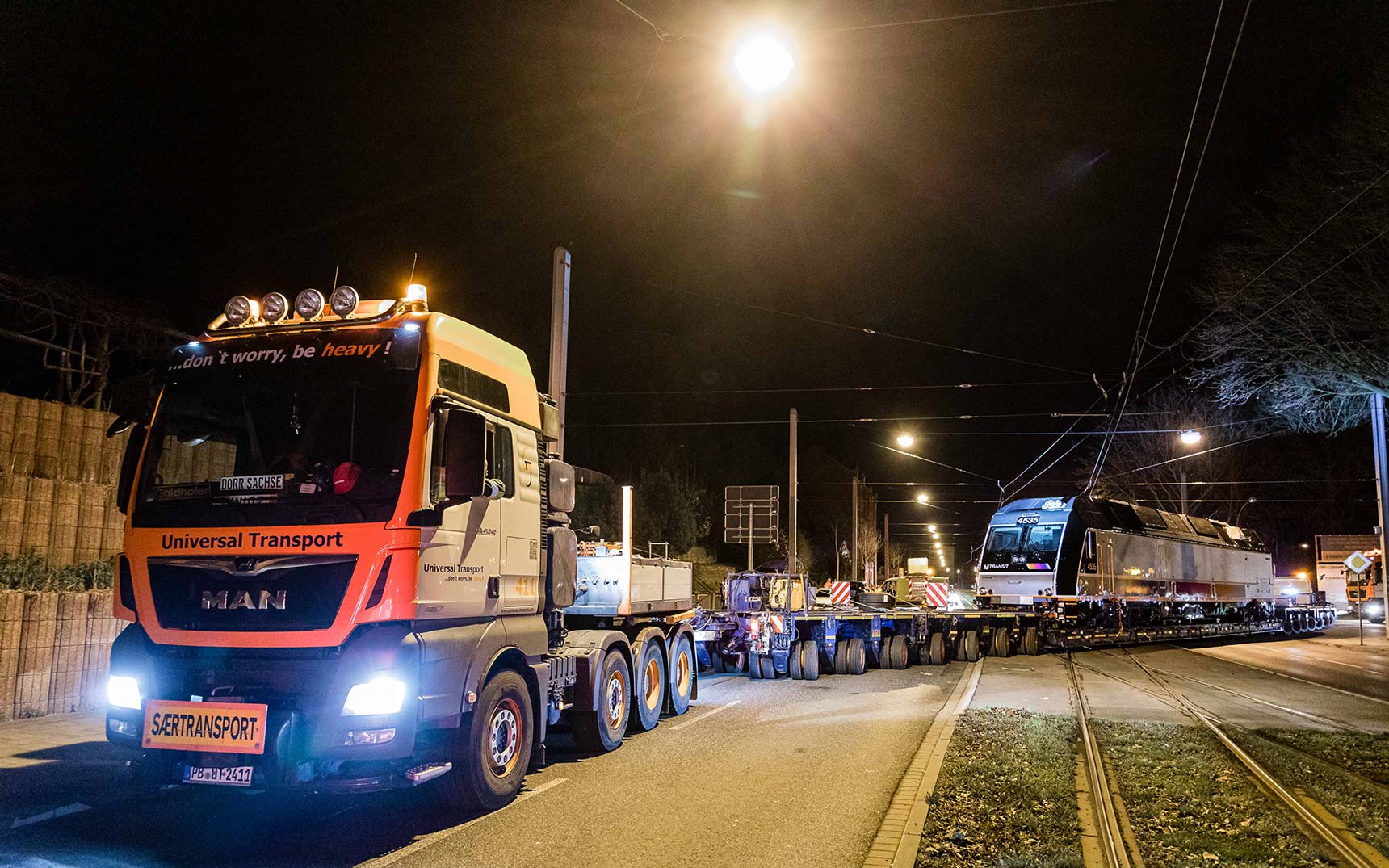 So the working atmosphere at Universal Transport is also exceptionally good. “My job is exciting because it is very varied. No two days are the same here, there are always new challenges,” says Dennis Gisella. Because the company has grown from a small core, the structures are still very familiar. According to Holger Dechant, hierarchies are flat. Anyone with a concern always gets a sympathetic ear. “We colleagues maintain good communication – so working is simply fun,” adds Gisella. “And of course it is simply exciting that we can make a big difference. With an order like the transport of a wind turbine, we look after it from A to Z, are active for a long time in the planning and implementation. And one day I drive past this plant and see what we have achieved together. That’s a great moment.” 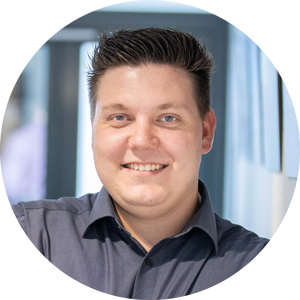 »One day I’ll drive past the wind turbine whose transport I helped plan and supervise – and see what we’ve achieved together. That’s a great moment.«

Electric ducks instead of trucks

The "Craftsmen in Freight Forwarding" 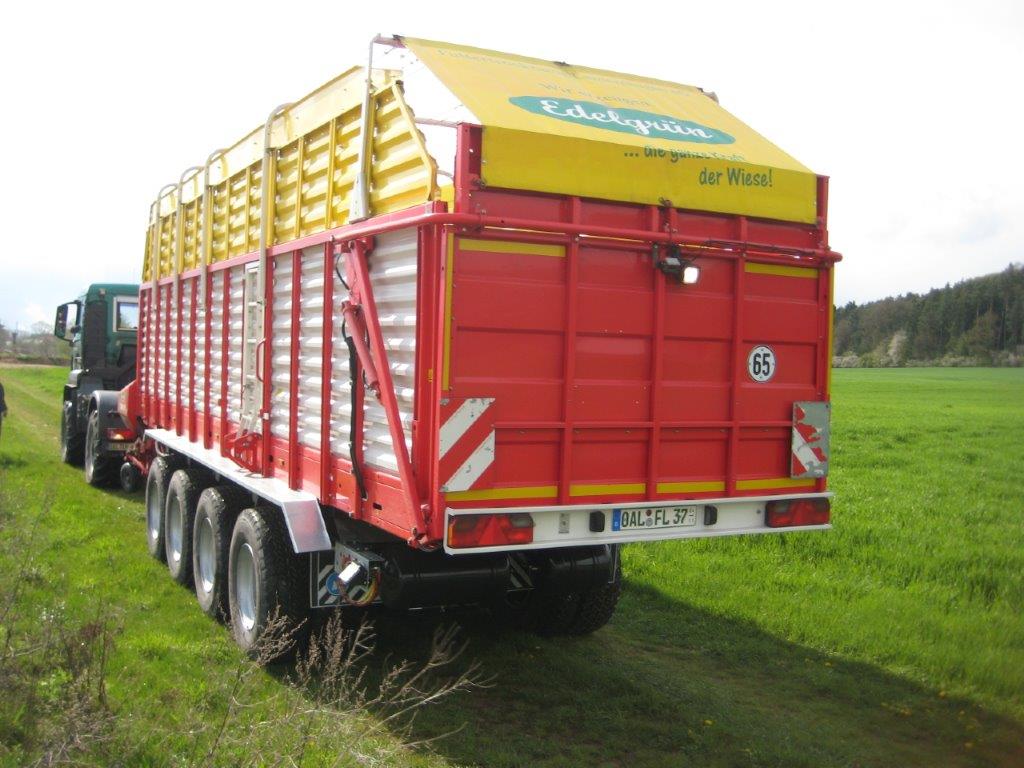 Gentle on the field, fast on the road 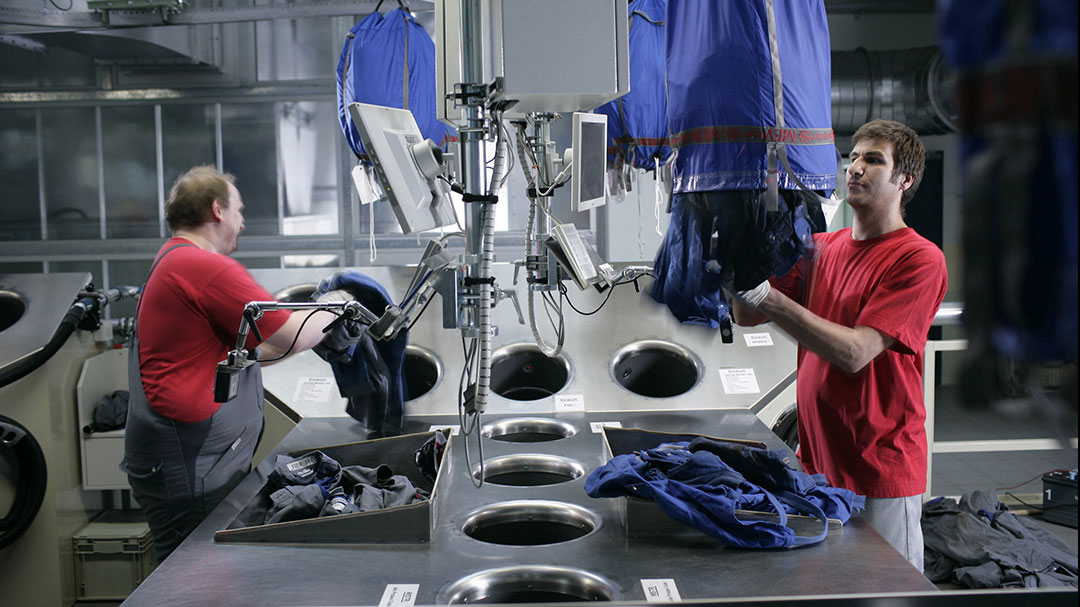