Is platooning the future of long-distance transport? 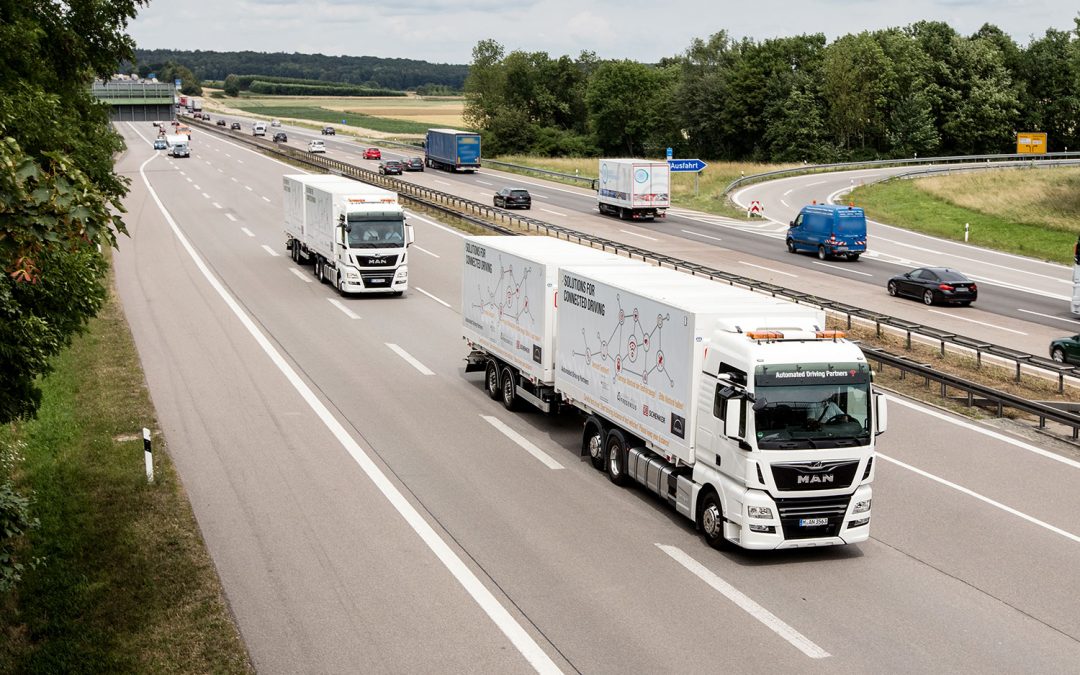 The technology was reliable, less diesel was used and the drivers were also satisfied: in a practical test on the A 9 motorway between Nuremberg and Munich, truck platooning convinced project partners DB Schenker and MAN Truck & Bus. Even if there is still a long way to go until it comes into operation, the initiators are certain that the technology offers great potential.

Platooning saves three to four per cent fuel on the road: according to the Result of the world’s first real-life test of networked truck convoys. And the initiators are convinced that there is even plenty of room for improvement: ‘We believe that values around six to eight percent are definitely realistic,’ explains Dr Chung Anh Tran, Head of Autonomous Driving – Road Transport at Deutsche Bahn AG. DB Schenker, in cooperation with MAN Truck & Bus and Fresenius University of Applied Sciences, tested two digitally networked trucks as part of a shuttle service between Nuremberg and Munich – and gained a lot of good experience in the process. Torsten Klein, Senior Vice President, Research, at MAN Truck & Bus, draws an initial conclusion: ‘Platooning reduces the complexity of automated driving; it is manageable and controllable. We were able to clearly demonstrate this during this project.’

Platooning can be implemented in practice

From mid-2018 to January 2019, two platoons of two were in operation on the digital test field along the A 9 motorway, which had been approved for this purpose by the German Federal Ministry of Transport and Digital Infrastructure. They were able to spend 69 per cent of driving time as part of a harnessed team. It was not possible to spend longer in formation, mainly due to regulatory frameworks – platooning is prohibited in the rain, through roadworks and at motorway junctions, for example. The vehicles drove at intervals of 12 to 15 metres. ‘We’d also like to drive a little closer,’ says Torsten Klein. ‘Ten meters would be technically possible.’ He was pleasantly surprised by the very high technical availability: ‘Thanks to the modern sensors and drive technology that we can use today, we are able to guarantee about 98 per cent system availability. This was an important finding from the test, which shows that the concept can be implemented in practice.’

Through the platooning project, MAN Truck & Bus and DB Schenker are pushing the topic of automated driving.

No incidents or delays

The aim of the Pilot project called EDDI, which was funded by the German Federal Government to the tune of around two million euros, was to test platoons in live traffic and to verify the efficiency claims seen in laboratories in practice. ‘We also wanted to find out if other road users would accept the technology and what fuel savings can really be achieved,’ stresses Torsten Klein. The test was run on an approximately 140-kilometre-long route between the DB Schenker hubs in Munich and Nuremberg. ‘Of course, we didn’t pick the most complex situations right away, but chose night drives instead – there is less traffic on the A 9 at that time. Nevertheless, there were sufficient occasions when platooning had to react to the traffic situations as well.’ With 35,000 kilometres driven in all, not a single safety-relevant incident occurred, nor did any unintentional severe deceleration: ‘There was just one incident involving a merging vehicle that very actively entered the platoon. But the system reacted exactly as it should react: it braked hard, avoided a collision and immediately disbanded the platoon.’

According to Torsten Klein, fuel savings of three to four per cent are considerable. ‘Nevertheless, it should not be underestimated that fuel is also needed to keep the platoon together.’ Each manoeuvre that causes the platoon to disband – when a car merges, for example – uses about 0.1 litres of fuel. ‘But we’re talking about savings of three to four per cent compared to the most efficient vehicles, and there’s plenty of potential for optimisation,’ Klein continues. ‘We’ve not yet been GPS-controlled and so far, we’ve had to drive at exactly 80 kilometres per hour. We must also not vary between accelerating and decelerating – it can all still make a big difference.’

Focusing on the drivers

The focus was also on the drivers, who were all DB Schenker professionals who had been specially trained for this assignment: ‘Thanks to support from the Fresenius University of Applied Sciences, we were able to observe them closely. We are interested, for example, in what secondary tasks we can expect of them and how burdened they are by platooning in real life.’ All trips were therefore followed qualitatively and quantitatively by a team of scientists from the university. Using electroencephalography (EEG) and eye tracking, among other things, they measured how much stress the drivers were under – or how little. They determined that, following an initial learning phase, drivers got used to using the system very quickly. And while 80 per cent of them had said before the test that they would rather not trust the technology, the opposite rang true afterwards: almost all had completely changed their minds. The drivers also realised that new opportunities would open up for them if they trained to become platoon drivers – and that they would be able to secure their professional future. There were also surprising findings from the test: ‘We could see, for example, that the driver at the front assumes far more responsibility for the platoon,’ reports Torsten Klein. ‘The front driver usually looked at the supporting IT much more frequently to check whether the rear vehicle was still coupled and driving at the correct distance.’

Three-stage road map on the way to platooning

Together, project partners DB Schenker and MAN have developed a three-stage roadmap that outlines how automated driving can be implemented in logistics. Stage one focuses on the vehicles: automation technology in the form of brake assistants and adaptive cruise control would have to be fitted in these vehicles as standard. Stage two describes platoons in which the individual units are still occupied by drivers. ‘We will probably be able to implement this technically this year,’ says Torsten Klein. ‘This can then be followed by the third stage from 2025 onwards: highly automated driving with and without platoons. This would be possible on trunk roads and motorways with a relatively manageable and clear environment. If we want to take all roadways and driving situations into consideration, we’re looking at 2030 onwards. Inner-city scenarios will take much more time.’ 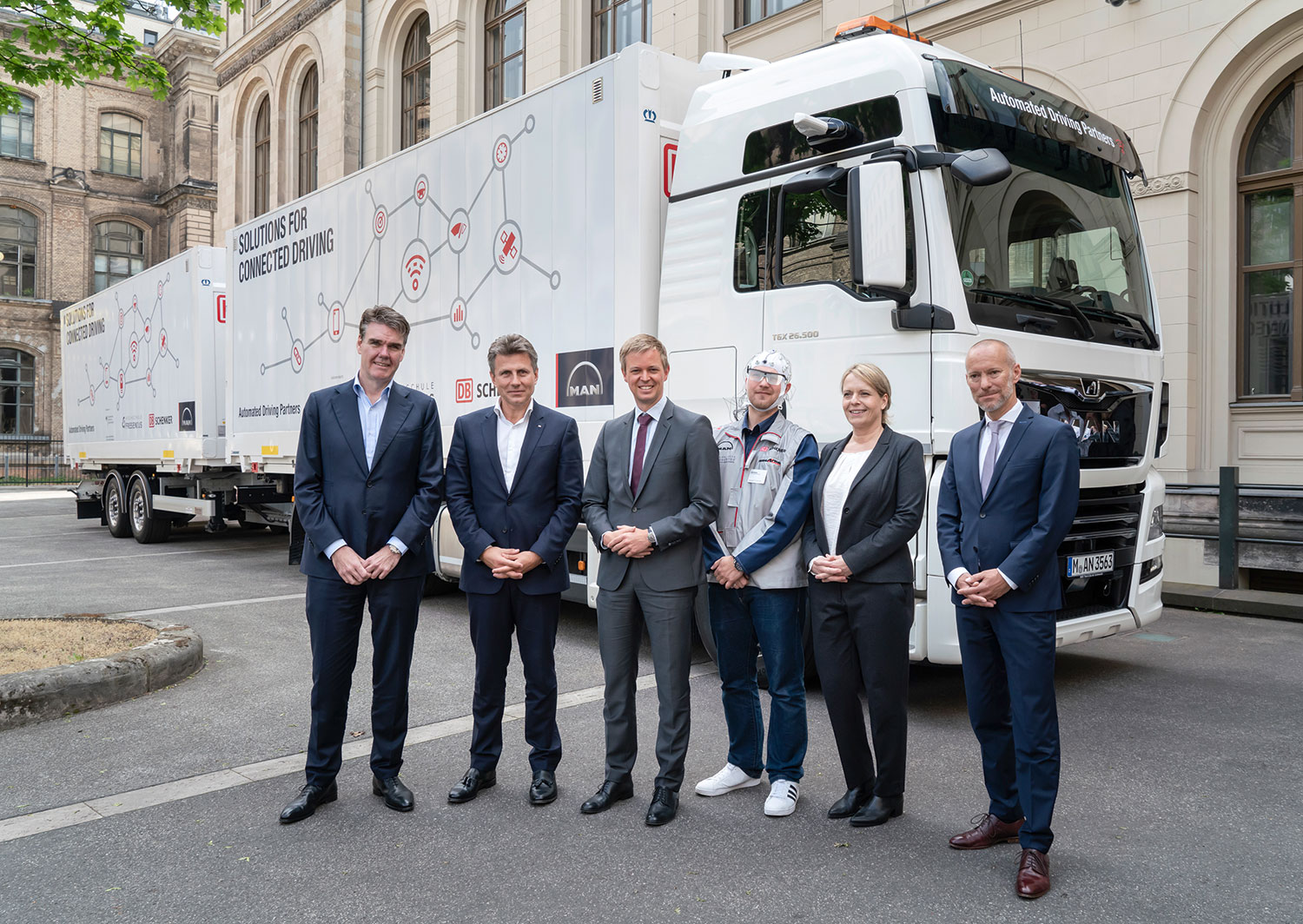 For DB Schenker, the Nuremberg–Munich route is also a good blueprint for its European cargo network: ‘We connect our 400 or so locations throughout Europe with several thousand similarly long routes. It would be possible to platoon around 25 per cent of these connections. This is projected to be around 40 per cent of the kilometres travelled by road – especially since these transports run according to schedule and can be planned very well.’ Specific sections on motorways would suffice: ‘These are the corridors that could be opened sequentially with a favourable network – that alone would mean great added value.’ Platooning is advantageous for the rest of the traffic, too: ‘Vehicles need less space in the platoons – 90 meters would accommodate three trucks instead of two. This is a particular infrastructural efficiency that the regulatory side should embrace.’

Apart from clarifying the legal basis, the provision of a suitable technical environment has also been lacking in the run-up to these live tests. ‘Intelligent traffic signs that preview upcoming motorway sections are very helpful for platooning, for example,’ says Dr Chung Anh Tran. And physical infrastructure should not be underestimated either: ‘Platooning partners must be able to meet to agree to drive the next section together. Space may be required for this purpose. All this is yet to be organised – we are still at the very beginning.’ 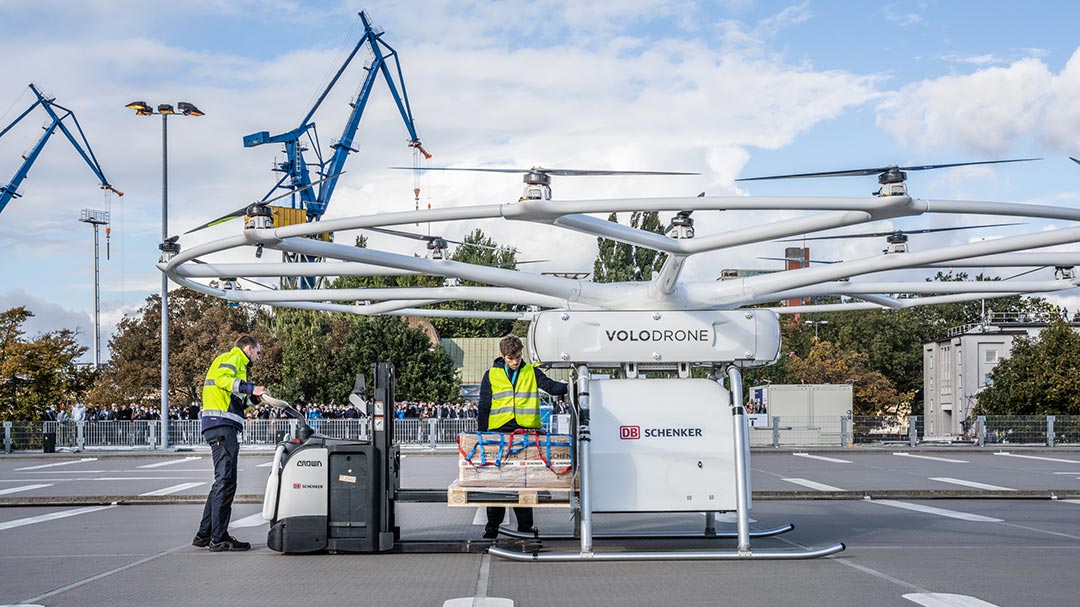 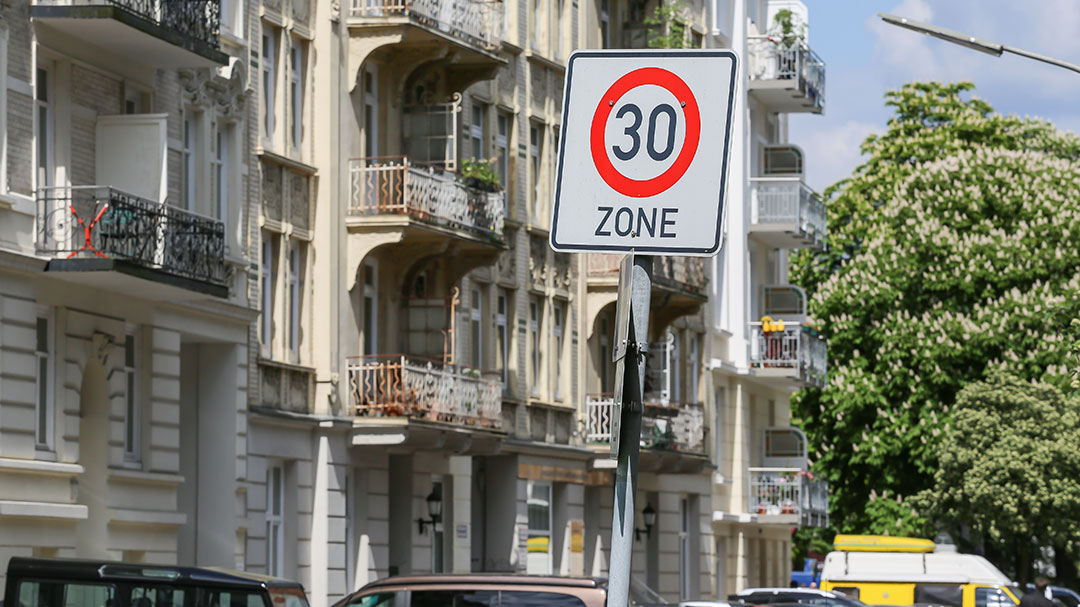 How can we prevent gridlock?