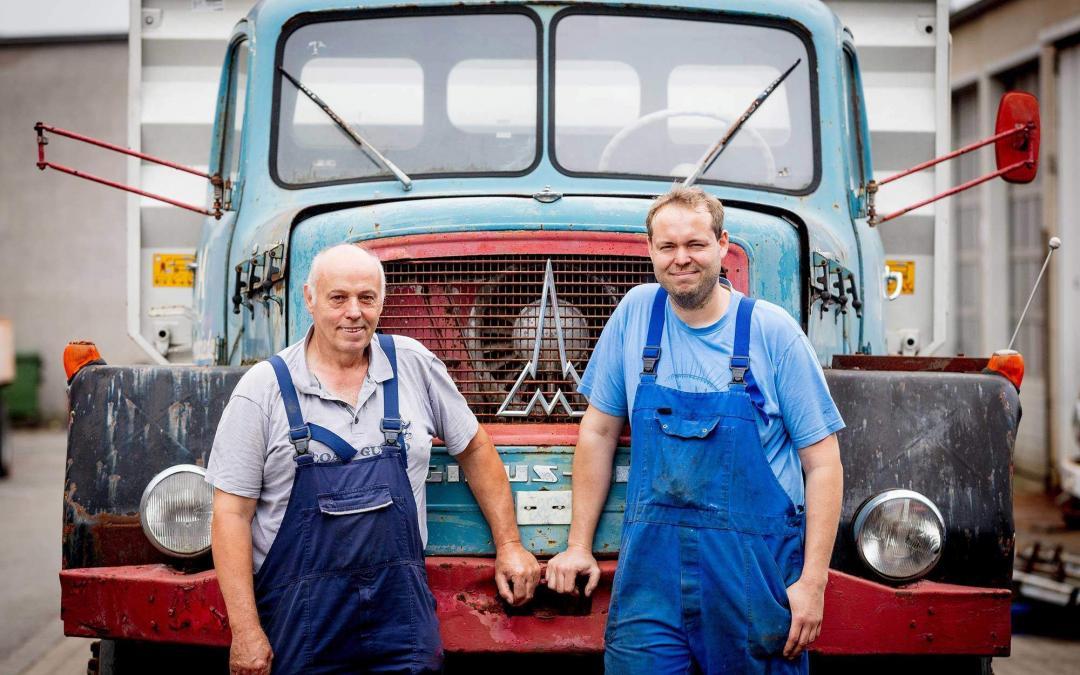 Restoring a classic truck to full working order demands patience, knowledge and perseverance. A fascination with the historic vehicles fuels these efforts.

Near the gasometer in Oberhausen, on a 44,000 m2 site where the Thyssen group once produced steel, more than 300 veteran vehicles have plenty of tales to tell about the history of German business. This is where Sascha Hoffmann and his father Helmut are bringing classic trucks back to life and back on the road.

Trained vehicle mechanic Sascha Hoffmann is 38 years old. Most of the trucks in the halls and outside the former industrial complex are older than him. They come from a time when there was no electronic parking assistance for manoeuvres – just a type of dipstick on the bumper to serve as a guide. A time when tipper bodies were opened by hand, when transmissions were not yet synchronised and when rear-view mirrors were no bigger than make-up mirrors. ‘One part engaged in the other back then,’ says Sascha Hoffmann fondly. He explains that he can easily take apart a classic vehicle and reassemble it five times without any parts becoming damaged. He has great respect for the quality that the old manufacturers produced. The sole enemy is rust: ‘modern bodywork is undoubtedly less susceptible,’ he reports.

A find that brought back memories

Hoffmann’s grandfather began running a haulage business in 1946, which his father Helmut then took over in 1970. Sascha was just seven years old when Helmut Hoffmann came across a customer’s old Büssing 7500-S in the 1980s – structurally identical to the one that the family business had started using in 1954 for haulage on the roads of the Ruhr region. This find was a key moment for him: Helmut Hoffmann remembered how he had always travelled with his father as a boy, sitting on the little wooden bench to the left of the driver’s seat. It didn’t take long for the motorsport enthusiast to make up his mind: he took the Büssing back to Oberhausen with him and restored the ageing vehicle with the help of his brothers. From then on, everything took care of itself: more and more vehicles came along, and the hobby became a career. In 2010, the Hoffmanns gave up the haulage company and began focusing on restoring old trucks.

Like in this story that Sascha Hoffmann tells about his father, who is now 71 years old, many of the customers who ask him for classic trucks have a very personal relationship with the vehicles. ‘When they buy one, it almost always has something to do with childhood memories,’ he says. The customer base is very diverse, ranging from building contractors to doctors and former truck drivers. They are all united by their passion for the old trucks they want to spend their leisure time with. Dumper trucks or 3-way tippers that can also be used as construction vehicles are particularly popular. 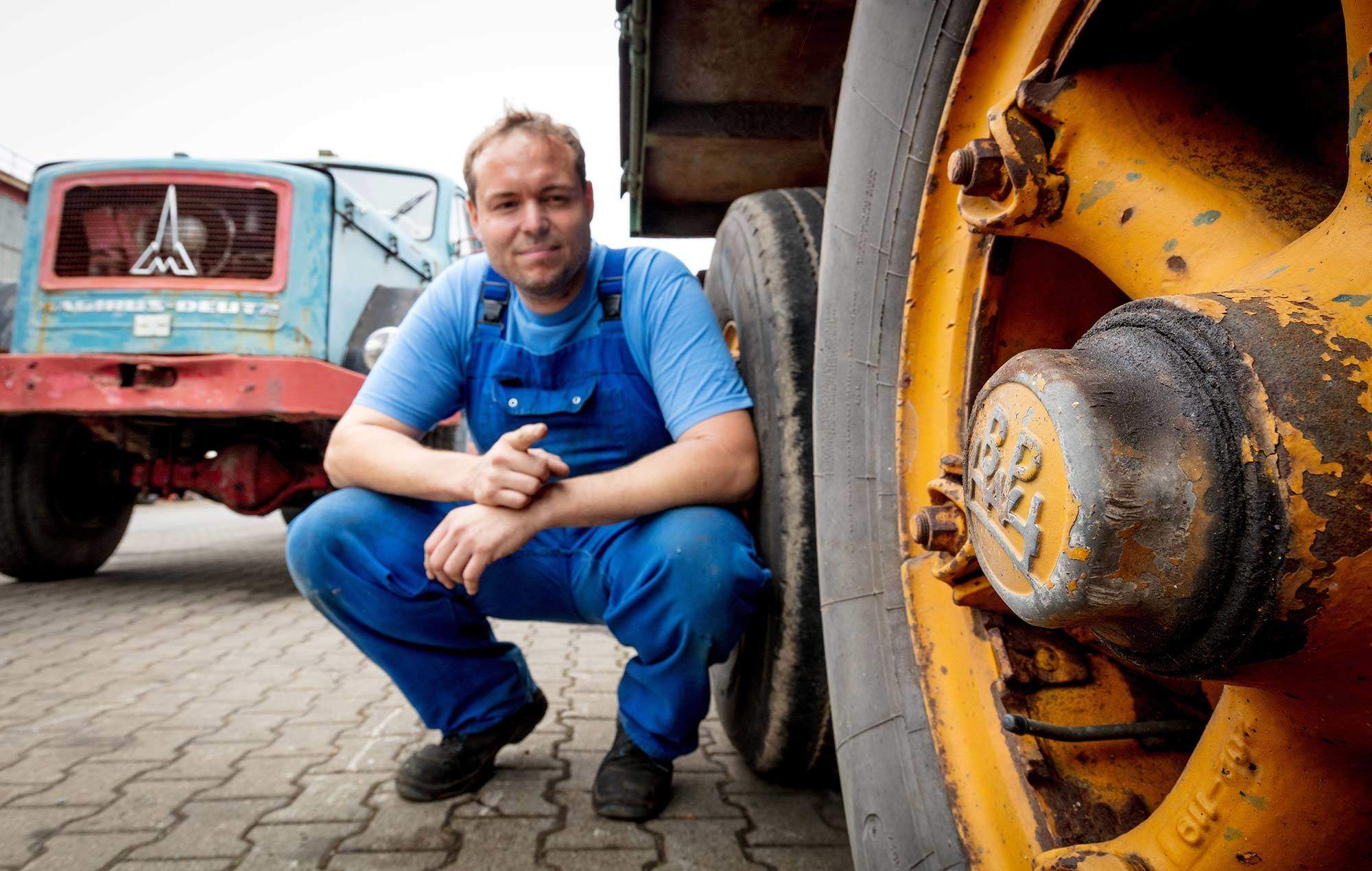 Quality since 1898: old BPW axles can also be found in the collections of the Nutzfahrzeug Veteranen Centers (NVC) the commercial vehicle veteran centre.

Restoring the classic trucks can take anything from a few months to a couple of years, depending on how much work is involved. 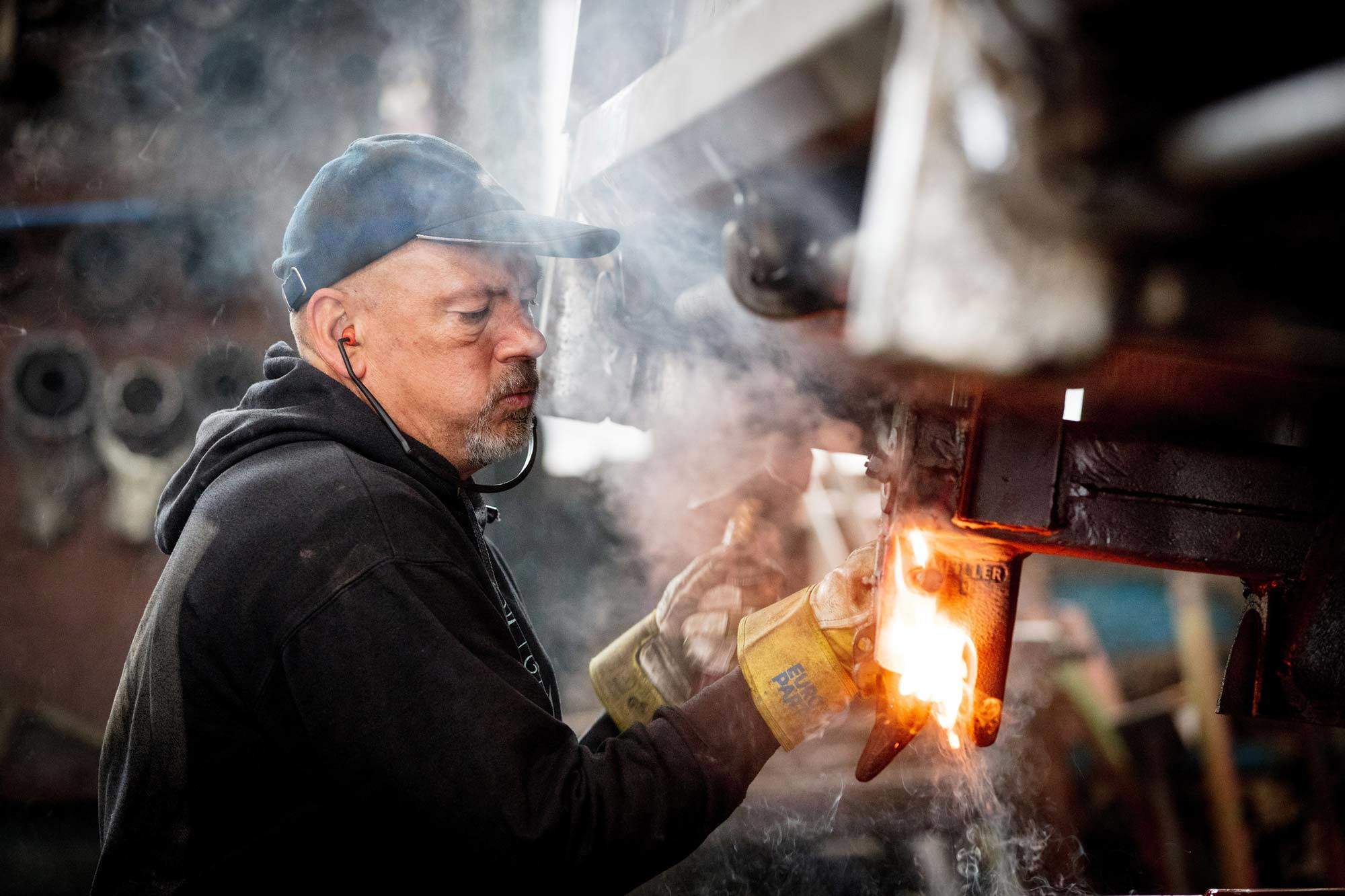 Be it Henschel, Büssing or Krupp – the names of the manufacturers are closely linked to the era of Germany’s post-war economic miracle. Sascha Hoffmann discovered his own favourite early on: Mercedes. He restored his first Mercedes truck at the age of just 16. He currently has a 319 van from the 1960s in one of the six lanes in his workshop building. The vehicle came from the volunteer fire service in Oetisheim and had been crushed from behind in an accident. It was straightened out in the workshop and the damaged parts are being replaced. The sheet metal for the sides and rear is ready to be fitted. When it comes to materials, the situation is relatively good for the 319 model as there are specialists who produce spare parts. The Hoffmanns also have a few written-off vehicles in stock themselves. The future of the classic models has already been decided: they will appear at vintage vehicle rallies as workshop vehicles for the Hoffmanns’ ‘Nutzfahrzeug Veteranen Center’ – the commercial vehicle veteran centre. ‘The van has only done 30,000 kilometres and has no technical problems,’ says a pleased Sascha Hoffmann. The 319 model is in high demand on the classic vehicle market and is one of the most popular vans, along with the T1 and T2. Repairs and restoration will take around a year and will include a new coat of paint from the in-house paint shop. ‘When we finish something like this, we know that we have really achieved something.’

King of the road

The company employs ten experienced mechanics, including body makers and electricians, who enjoy working on old vehicles and know a great deal about them. Some of them are currently working on a red Henschel HS15 two rows down from the Mercedes 319. The vehicle was previously used as a tipper by a road maintenance depot and is still largely in its original state. The 192 hp engine has just 50,000 kilometres on the clock. A customer bought the vehicle from the Hoffmanns’ collection and has been having it converted into a semi-trailer truck for the past six months. A camper body will transform the vehicle into a mobile home. It is soon to be delivered.

Some customers bring the Hoffmanns their own trucks for restoration. Others find their dream vehicles in the company’s range and have them tailored to their requirements. This can take anything from a few months to a couple of years, depending on how much work is involved. Helmut Hoffmann knows this only too well: a year after he finished the old Büssing, he took on a Krupp Titan that had been owned by the Belgian army. The ‘king of the road’ has 210 hp and Hoffmann extended its frame with the short cab using old factory drawings. Faster axle inserts enable higher speeds of up to 90 kilometres per hour. The flatbed truck took between 3,000 and 4,000 hours to restore and is Hoffmann’s showpiece at classic vehicle events. He has proudly added the old company lettering on the front: ‘Spedition Hoffmann Oberhausen/Rheinland’ – and rightly so.

Joachim Fehrenkötter knows from experience the fascination that classic models can inspire. The haulier from Ladbergen was 13 years old when his father discovered a dilapidated 1953 Büssing 8000 at a construction company. His father filled up the tank with diesel and started the 180 hp engine – and was fascinated by the sound produced by the 13 litre, six-cylinder engine. ‘The noise blew him away,’ says Fehrenkötter with a grin. His father took the Büssing with him and restored it: ‘He took it apart right down to the last bracket and in doing so, transported himself back to his youth.’ For the young Joachim Fehrenkötter, it meant that his parent’s truck yard, which was something of a playground for him, would see the addition of classic vehicles from then on. These are now on display in a small museum.

The hobby and passion became part of the company’s main business. The haulage company uses 30 of its own Flexcover vehicles to transport agricultural machinery and tractors from manufacturers such as Krone and Claas, as well as high-value cars, but has also made a name for itself among collectors. ‘Word got around that we can transport classic vehicles from A to B cleanly under a tarpaulin. We have already had some vehicles on the truck two or three times,’ says Fehrenkötter. The semi-trailers can carry vehicles with a width of up to 3.20 metres, and axles from BPW guarantee the required degree of stability. It is no secret on the scene either that the 48-year-old has a very good understanding of what he’s carrying: ‘if nobody knows how to start an old pre-war vehicle, I am the one they ask.’

The Fehrenkötter haulage company transports loads such as valuable classic models in its own Flexcover vehicles.

HAVE A GO AT VEHICLE CONSTRUCTION

Over five millennia of the cultural and engineering history of drawn vehicles are explored at the Axle, Wheel and Carriage Museum in Wiehl, where BPW presents its own historic and modern axles alongside prehistoric and ancient exhibits from Europe, Asia and Africa and contemporary exhibition pieces on vehicle construction.

Several interactive displays encourage visitors to play around with some running gear components themselves. They can also find out how carriages were invented and became widespread. Informative text panels guide the visitors through the themed areas and explain the complex concepts in a way that even non-specialists can easily understand.

In spring 2018, the museum received a visit from the vehicle manufacturing company Kempf Fahrzeugbau, which brought along its own collector’s items. A piece of haulage history rolled through Wiehl and it was only fitting that it should make a stop at BPW, as the illustrious convoy of commercial vehicles also included many BPW axles.

The museum is open every Sunday from 1 p.m. to 5 p.m. Demonstrations also take place in the smithy on the first Sunday of the month during opening hours. 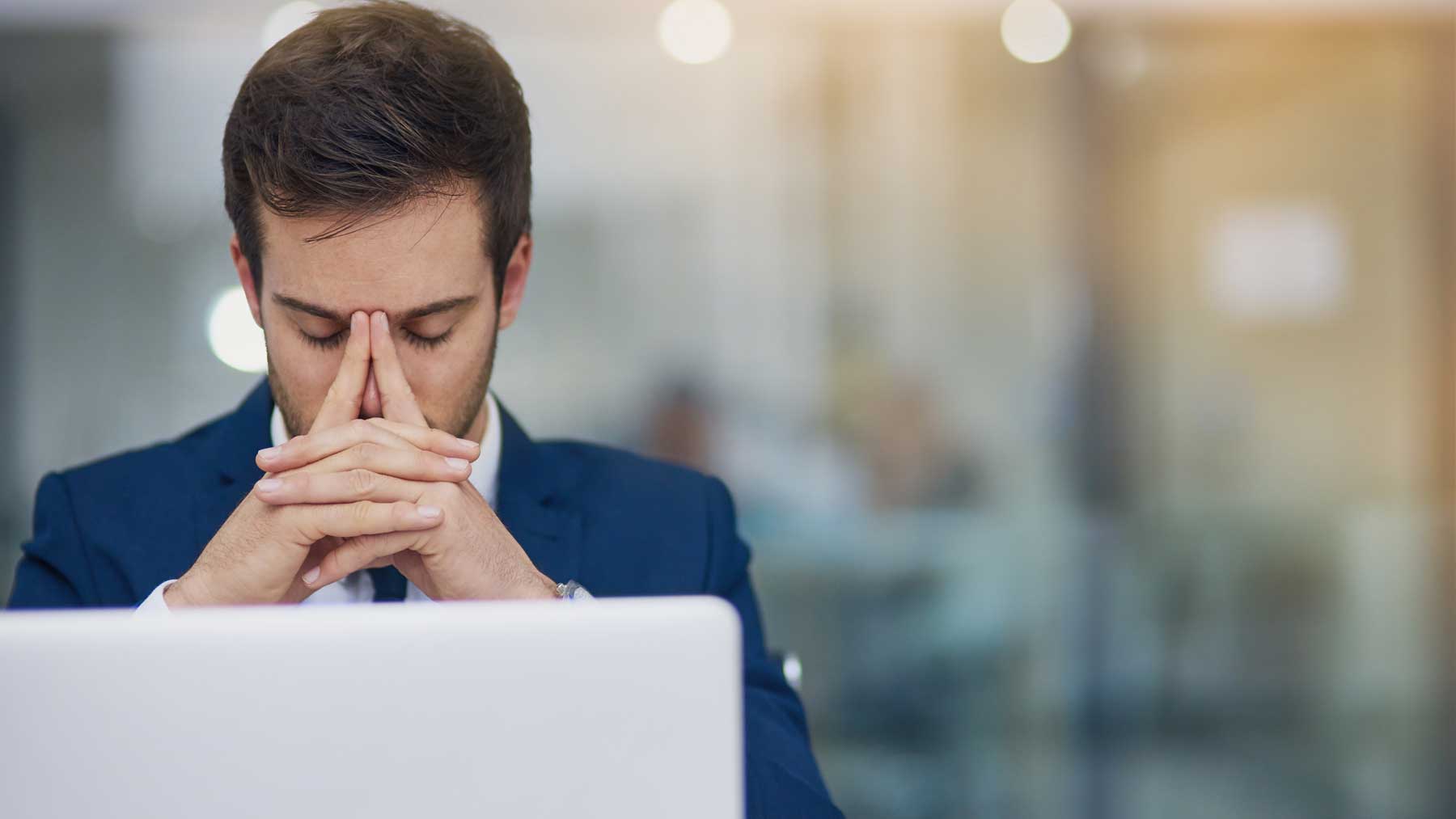 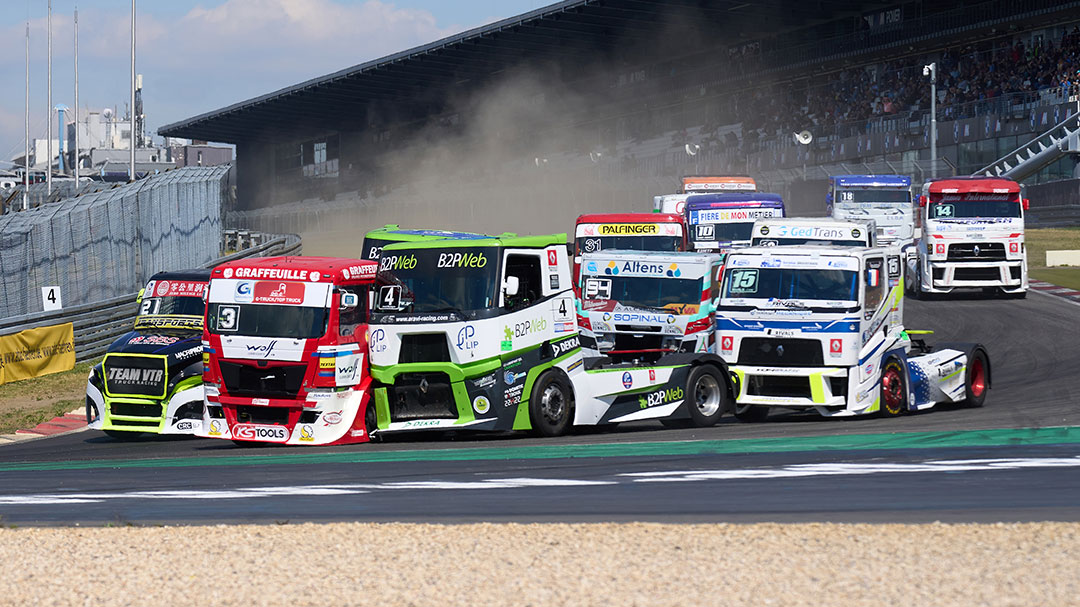 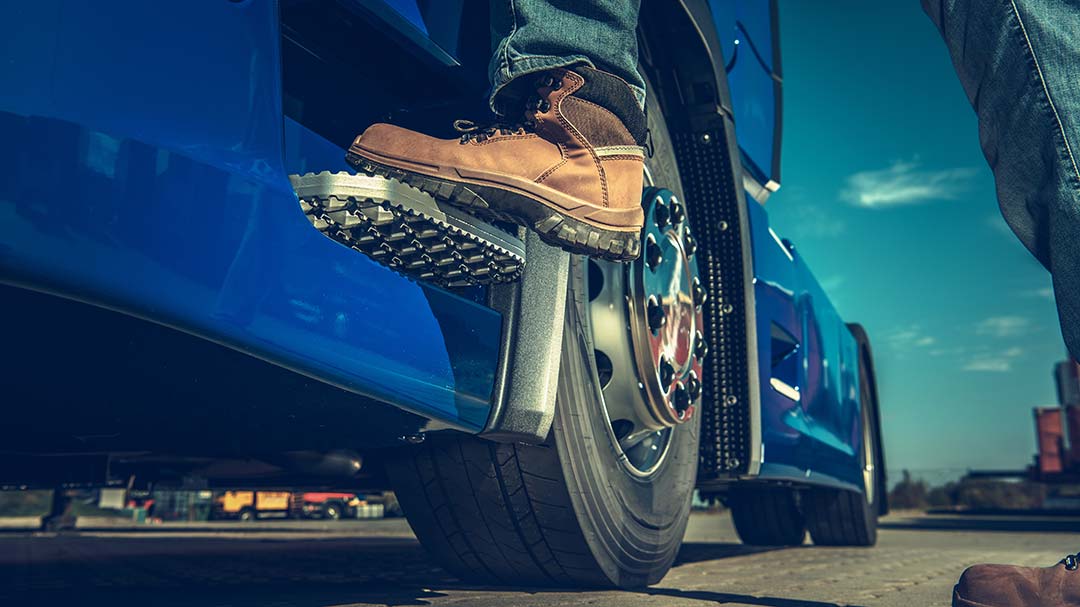