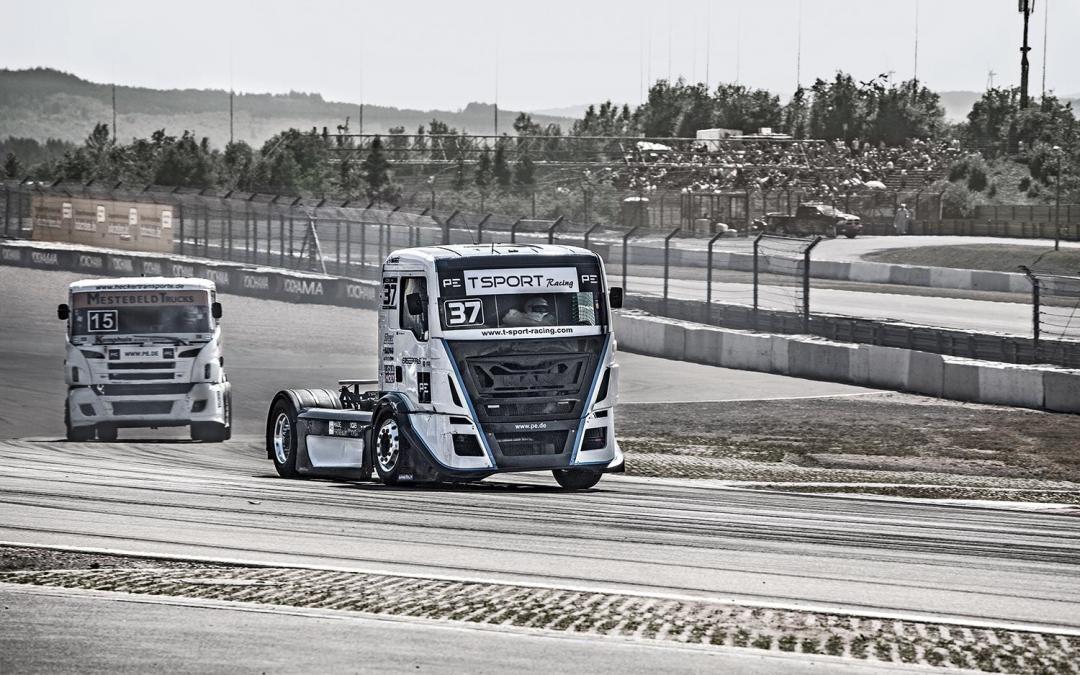 With the sonorous sound from an engine with a capacity of over twelve litres and a tremendous torque fed by more than 1,000 horsepower converging in wheel-to-wheel battles, there are few who can resist the fascination of truck racing. The motorsports enthusiasts involved will even sacrifice a night’s sleep in the fight for tenths of a second and trophies.

Summer 2018 at the Nürburgring: it is a hot day and the stands are teeming with thousands of expectant fans. They are eagerly awaiting the European Truck Racing Championship races. Things have got a little heated for the British T Sport team headed by driver Terry Gibbon – and not because of the weather, although it is uncharacteristically hot for the Eifel region. Instead, it is an unforeseen technical problem that they are sweating over.

The meticulous planning for the highlight of the season began six months ago. The crates were packed and the trailer was filled with the equipment and spare parts weeks ago. The first team members met at the race track and put everything together in the drivers’ paddock five days ago. And then came the awful moment: one of the cylinder heads of the large six-cylinder engine ruptured in the first qualifying session on the Friday. All hopes of a good starting position for the race the next day faded away. And to make matters worse, it cast doubt on whether Terry Gibbon would even be able to race at all. As the component is not a standard part, a replacement would only be available at short notice from the racing team’s base in the UK.

100 kilograms of spare parts in their luggage

But motorsport enthusiasts are always excellent logisticians too. They were soon on the line from the Nürburgring to the team headquarters in Burscough, which is situated between Liverpool and Manchester. The spare parts that were so urgently needed were available – but how could they be brought to the paddock literally overnight? The solution: some of the team members who had stayed behind in the UK packed six cylinder heads weighing around 100 kilograms, booked a flight and – after some very critical scrutiny by the British customs officials – took off that same evening. The technicians managed to quickly organise a hire car at Düsseldorf Airport and drove for six and a half hours, finally reaching the Nürburgring at 3.30 a.m. 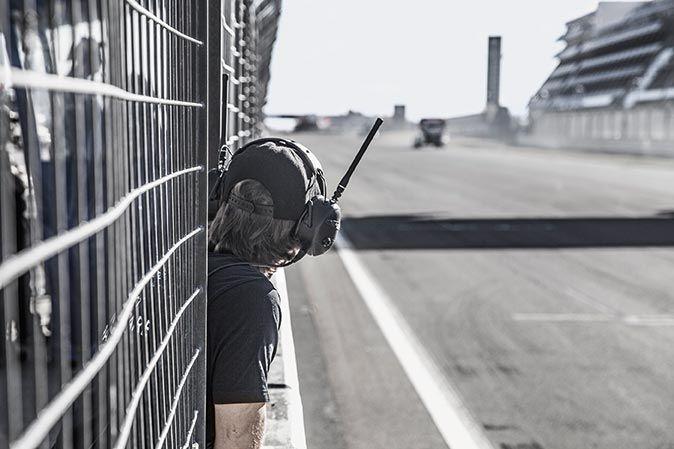 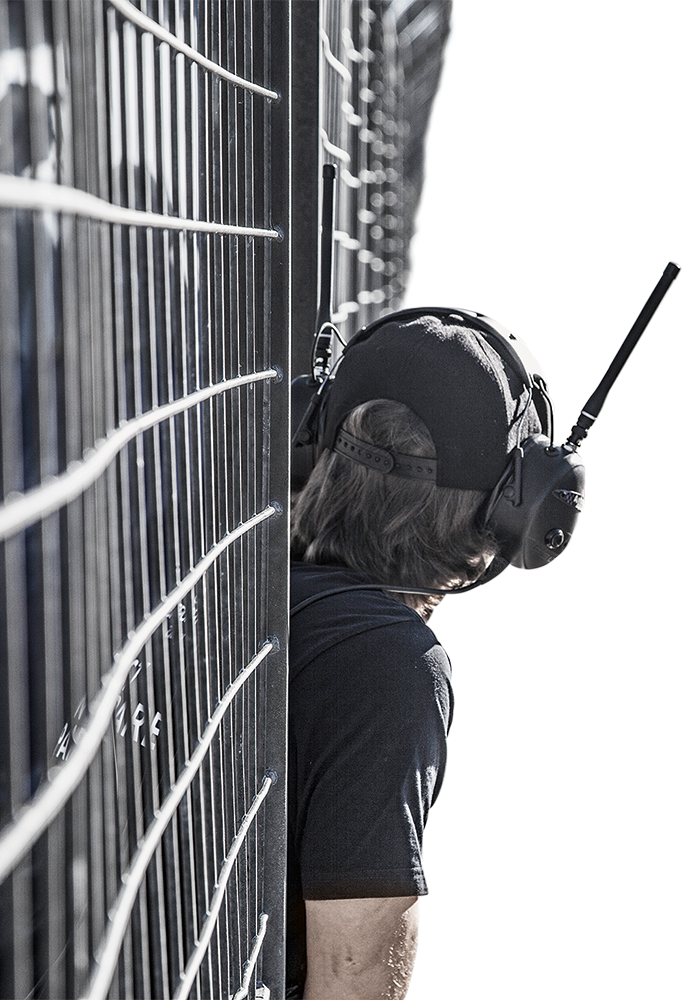 The rest of the team had been anxiously awaiting the spare parts and worked through to the morning to fit them on the machine. Time to sleep? Not a chance. It was 7.30 a.m. by the time they managed to fire up the rebuilt engine. A real precision landing! ‘That was tight – just half an hour before the warm-up on the track. Our cheers could definitely be heard across the whole paddock,’ says Melanie Derflinger, who is in charge of marketing for the relatively new T Sport team. But the tension didn’t end there. Would the engine run smoothly or could some carelessness perhaps have crept in during the hectic night? Everyone let out a sigh of relief when 36-year-old Terry Gibbon completed the warm-up without any problems. The team was able to start the first of the day’s two races just a little later – by then there was no trace of the challenges they had faced in recent hours. Their full concentration was on the upcoming competition.

Stories that might sound like a movie script are in fact pure reality and account for a large part of the fascination with motorsport. Even with all the best preparations and planning, you never know what will happen on the track. Being prepared for anything, making split-second decisions and working continuously to move up the rankings – this is what makes racing particularly appealing for Tim Frost. He set up the team almost three years ago. ‘Other teams generally only have particular strengths in one area – engineering or marketing. We want to combine both aspects of truck racing,’ explains Frost after the full night of working in the paddock. Having spent many years in this sport, including as chief engineer, he wanted to create something of his own. He found an enthusiastic ally in seasoned driver Terry Gibbon: ‘it was also his idea to call us T Sport because both our first names start with T.’

The core team at T-Sport is made up of four permanent staff. During the racing season, the team brings many more helping hands on board. All of this can only be achieved when you have loyal supporters on your side. T Sport Racing, for instance, has been working with the parts specialist PE Automotive, a subsidiary of BPW, as an official partner since the team was founded – which can be seen from the logos and the company’s characteristic blue on the racing truck. ‘We specifically see ourselves as more than a purely financial sponsor and we want to provide technical support in a real partnership,’ explains managing director Christian Freitag. PE has been supplying numerous components to truck racing teams for many years. Freitag finds it fascinating to watch when components that are similar to standard parts have to prove themselves in harsh battles on the racetrack. Take wheel nuts for example, which have to withstand so much rough impact – and still be easy to undo after the finishing line.

The PE racing wheel nut has been specially made for this purpose and has been tried and tested in countless contests on the track. The hexagon socket nut is made from one piece and individually processed as a blank. This effort pays off: ‘we can always rely on PE products such as the wheel nut, even with the heavy loads on the race track,’ explains Tim Frost. A prime example of the close technical ties between PE and truck racing is a high-performance brake disc that was specially developed from the series-production part. Thanks to extra-efficient water cooling, it remains cool at all times during racing, even at 600 degrees Celsius, and retains its full braking power.

Melanie Derflinger explains that motorsport demands peak performance from all involved: ‘we sometimes have extremely long working days and almost always work seven days a week. On average, we have just one day a month off. But despite this, truck racing is incredibly fun!’ She says that the best thing about this sport is the feeling of being part of a family – everyone knows everyone else and they all help each other. The fans get right up close to the action too: whereas other race series are fenced off all around, the spectators here can come right into the paddock, quite literally get their hands on the racing trucks and even chat to the technicians.
Team founder Tim Frost (right) enjoys taking the time in the pit to explain the complex technology to fans.
Terry Gibbon is actually one of the T Sport ‘grease monkeys’ too. The driver doesn’t ever relax between races, but instead sets about personally preparing his truck for the starting line again. After all, everyone in this team mucks in.

The night shift and the enthusiastic efforts during the weekend at the Nürburgring were more than worth it. Even though the small T Sport team couldn’t run the very latest engine generation, which put them a good 100 hp behind the top teams, Gibbon managed to bring home impressive results. On the Sunday, he even scored third place in the Grammer Truck Cup and was able to lift a trophy on the winners’ podium. One thing is now certain for the entire team: the hard work paid off – and they will all be back with 200 per cent motivation at the next race weekend.

A happy end to a turbulent weekend: the T Sport family was ultimately able to celebrate a podium position – and driver Terry Gibbon knows that all their efforts have paid off

‘Data is the new currency of the 21st century.’ Christian Freitag from PE Automotive can’t help but smile at statements like this. That’s because it is well over 20 years since his father Jürgen Freitag founded PE Data GmbH – with the precise aim of making intelligent use of data and optimising complex data handling in the parts trade. After all, the variety of spare parts is particularly wide in the commercial vehicle sector, and when it comes to bodies, for instance, almost every unit is a one-off. 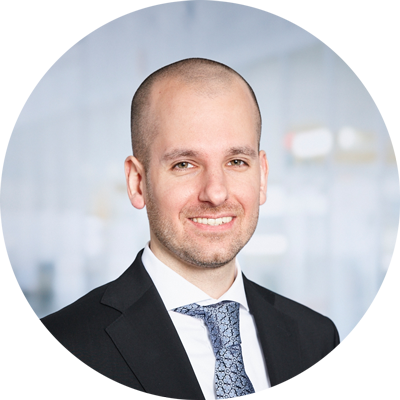 »With our solutions, we aim to make this complexity easier to manage for all involved – retailers, garages and part manufacturers – and enable digitised business processes.«

Whereas microfiche was still the tool of choice in the company’s early years, PE Data now manages and maintains vast databases containing countless pieces of information. ‘Speeding up the parts identification process has always been a focus for us,’ continues Christian Freitag. The ‘Quick.VIN’ shop solution has proven itself to be a real trendsetter for the commercial vehicle market since it was unveiled in 2017. Retailers can use this to also offer their garage customers efficient support in the digital world – with their own web address and individual branding. The use of ‘quick’ in the name for the shop system says it all: the quick and simple parts identification means much greater efficiency for garages and retailers alike. To achieve this, the system cleverly combines the familiar OE search logic with an intelligent parts search. To put it simply, the user enters the information that they know about the required spare part. The intelligent software takes care of the rest. The roll-out for the shop system is in full swing. Projects with leading parts retailers are being planned across Europe and some are already in the implementation stage.

PE is already preparing the next solution for digitised processes with ‘QR.VIN’. The idea is a vehicle-specific QR code, which is attached to the vehicle as a sticker and links directly to the parts retailer’s online shop. During the next service appointment, the code simply needs to be scanned on a mobile phone to identify the parts that are suitable for this specific vehicle and order them in a just a few clicks. The founder of PE Data would certainly not have dared dream of such simple processes in the complex world of spare parts for commercial vehicles 20 years ago.

The joy of driving 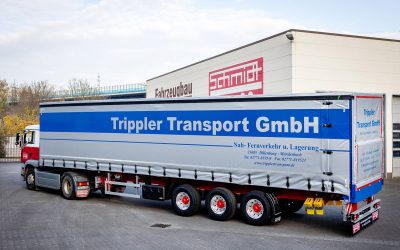 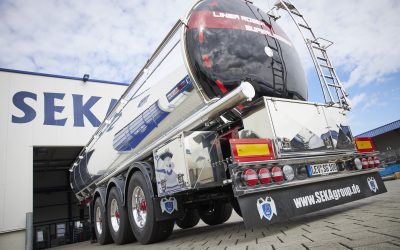 The Queen of the tank trailers 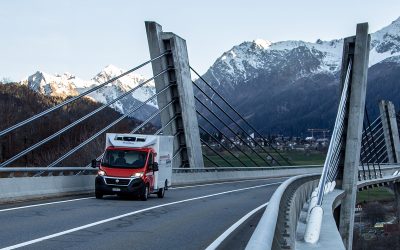 Telematics gets everything onto the supply chain